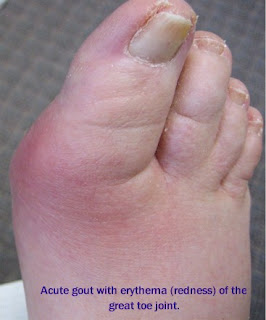 Gout, otherwise known as podagra or uric acid arthropathy is a rheumatic complaint, that usually attacks a single joint at a time. The disease has a preference for the big toe of middle-aged men - it swells, turns red and becomes sore. The soreness is such that just walking through a room can cause severe pain. It is more common in men than women by a factor of 10 to 1.

What is the cause of gout ?

How do you get gout ?
The are two kinds of gout :

1) Primary hyperuricaemia and gout
Hyperuricaemia means an increased level of uric acid in the blood. It is usually caused by an hereditary abnormality in the system that changes the nucleic acid into uric acid. In this case the body is incapable of excreting uric acid fast enough even during normal circumstances.

2) Secondary hyperuricaemia and gout
Is caused by another disease or because of consumption of certain medicines (eg diuretic preparations, which increase the output of urine, and acetylsalicylic acid derivatives including aspirin). In these cases, the problem is that the body produces such large quantities of uric acid that the kidneys cannot keep up.

What are the signs of gout ?

Prior to the onset of symptoms of gout, there is usually a latent period of several years in which the concentration of uric acid in the blood has gradually increased. This condition is called asymptomatic hyperuricaemia.

Some 95 per cent of the people with this condition never develop gout.

The first gout attack is often at night. Typically, the afflicted person wakes up in the middle of the night with extreme pain near the joint of the big toe (if the pain is in the knee it is called gonagra). The joint is swollen and may turn a shining purple. Even the smallest stimuli produce severe pain, for instance a blanket on the toe. The first attack usually subsides after about a week. About 10 per cent of the victims will never again experience gout whereas others will experience more frequent and longer lasting attacks if they are not treated. If it is not treated, repeated cases of gout over several years can produce permanent damage in the joint.

If no preventive treatment is undertaken, over time, sodium urate will collect under the skin. In this case the crystals are seen as small bumps near the joints or on the outer side of the ear called tophi. Occasionally they rupture or ooze out yellowish chalky materials.

Who is at most risk ?
Gout attacks are brought on by several factors including :

* some foods with a high content of protein and purines, such as liver, kidneys, sardines, and anchovies.

* haemorrhages in the gastrointestinal canal.

* conditions in which there is a high rate of cell turnover, eg leukaemia, lymphoma, psoriasis.

* Cut down on alcohol consumption.

* Avoid food that you know can cause attacks.

How does the doctor diagnose gout ?

The diagnosis is usually made from the way the patient presents the symptoms, plus the clinical picture.

In order to rule out other rheumatic complaints, the doctor will usually take a blood sample to measure the concentration of uric acid. He may also undertake an X-ray examination and an examination of the synovial fluid (found within joints), where uric crystals will be visible by using special equipment.

About 60 per cent of the people who experience a gout attack will have a similar or more severe attack within the next year.

The disease can become complicated with calculi (stones) in the urinary system.

With modern treatment it has become much easier to relieve gout.

How is gout treated ?
Treatment is concentrated on three areas :

a) during the actual attack the most important thing is to soothe the pain with non-steroidal anti-inflammatory drugs (ordinary analgesics like paracetamol will not relieve the pain, and aspirin must not be used). Colchicine is used to relieve the pain in people who cannot take NSAIDs.

c) finally it is important to change your lifestyle, as described above.

The goals of the treatment are to remove the pain and the swelling, prevent further episodes, prevent and treat tophi and to stop the production of stones in the urinary system.

[Based on a text by Dr Flemming Andersen]
Posted by The Green Sanctuary at Friday, January 02, 2009